The tufted titmouse (Baeolophus bicolor) is a small songbird from North America, a species in the tit and chickadee family (Paridae). The black-crested titmouse, found from central and southern Texas southward, was included as a subspecies, but now is considered a separate species, Baeolophus atricristatus.

Tufted Titmice nest in tree holes (and nest boxes), but they can’t excavate their own nest cavities. Instead, they use natural holes and cavities left by woodpeckers. These species’ dependence on dead wood for their homes is one reason why it’s important to allow dead trees to remain in forests rather than cutting them down.


Unlike many chickadees, Tufted Titmouse pairs do not gather into larger flocks outside the breeding season. Instead, most remain on the territory as a pair. Frequently one of their young from that year remains with them, and occasionally other juveniles from other places will join them. Rarely a young titmouse remains with its parents into the breeding season and will help them raise the next year's brood. 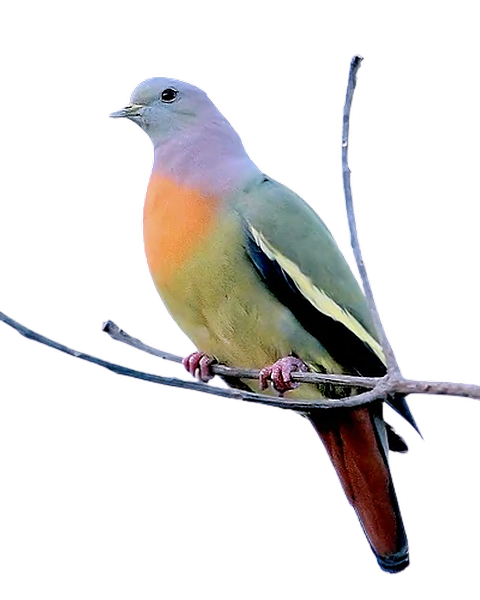 The pink-necked green pigeon (Treron vernans) is a species of bird of the pigeon and dove family, Columbidae. It is a common species of Southeast Asia, found from Myanmar and Vietnam south through to the major islands of Indonesia and the Philippines (where it is called "punay"). It is a medium-sized pigeon with predominantly green plumage; only the male has the pink neck that gives the species its name. The species lives in a wide range of forested and human-modified habitats and is particularly found in open habitats. Its diet is dominated by fruit, in particular figs. Pairs lay two eggs in a flimsy twig nest in a tree, shrub, or hedge, and work together to incubate the eggs and raise the chicks. The species is thought to be an important disperser of fruit seeds. The species has adapted well to human changes to the environment, and can be found in crowded cities as long as fruiting trees are present. It is not considered to be at risk of extinction.

Pink-necked green pigeons usually divide the responsibility of building the nest equally. Male pink-necked pigeons collect the materials for building nests whereas the females build them and are built on trees or shrubs. There is no particular season for these subtropicals to breed. Female pink necked green pigeon lays two white eggs and it is incubated by both males and females. Male pigeons incubate during the daytime whereas females take up the duty at night. After 10 days of hatching, chicks start to fly. The skin of chicks is brown in color.

The American goldfinch (Spinus tristis) is a small North American bird in the finch family. It is migratory, ranging from mid-Alberta to North Carolina during the breeding season, and from just south of the Canada–United States border to Mexico during the winter.

The only finch in its subfamily to undergo a complete molt, the American goldfinch displays sexual dichromatism: the male is a vibrant yellow in the summer and an olive color during the winter, while the female is a dull yellow-brown shade which brightens only slightly during the summer. The male displays brightly colored plumage during the breeding season to attract a mate.

The American goldfinch is a granivore and adapted for the consumption of seedheads, with a conical beak to remove the seeds and agile feet to grip the stems of seedheads while feeding. This finch has also been known to eat garden vegetation and is particularly fond of beet greens. It is a social bird and will gather in large flocks while feeding and migrating. It may behave territorially during nest construction, but this aggression is short-lived. Its breeding season is tied to the peak of food supply, beginning in late July, which is relatively late in the year for a finch. This species is generally monogamous and produces one brood each year. 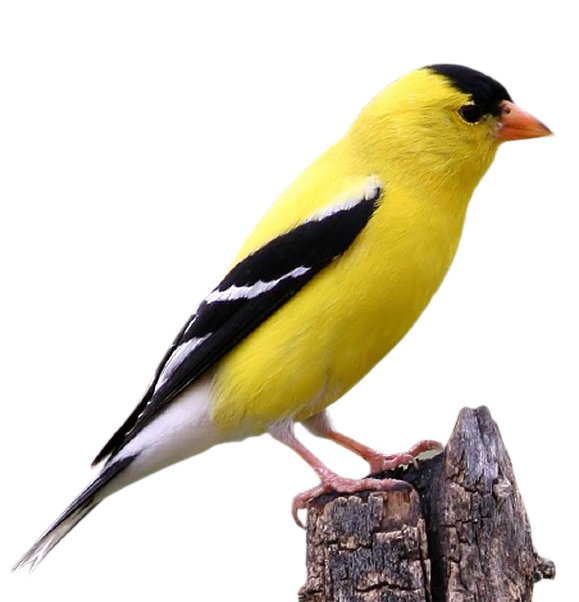