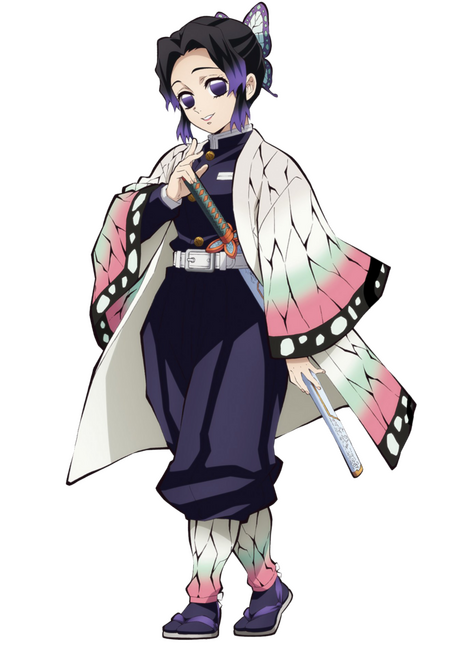 "I once believed that the road of happiness continued forever and ever into the distance. When it was destroyed, I realized for the first time that it lies upon a thin sheet of glass."


Shinobu Kocho is a major supporting character of Demon Slayer: Kimetsu no Yaiba. She is a Demon Slayer of the Demon Slayer Corps and the current Insect Hashira.


Shinobu displays a bright, friendly and cheerful demeanor, always having an easygoing smile on her face regardless of the situation she is in. However, her outward behavior is shown very quickly to be a façade. This is displayed in the way she enjoys teasing others, to the point of being rather sadistic about it, enjoying most notably to pick on Giyu Tomioka. Despite her relaxed exterior and her initial claim of wanting to get along with demons, she can be rather cruel towards them, which is seen when she kills the Spider Demon (Daughter) after giving her false hope of helping her, and attempting to kill Nezuko Kamado without hesitation. Later on, she is shown to have a more compassionate side towards both Tanjiro Kamado and his sister after hearing their full story.