"We activate our brains to receive telepathy."


Tome Kurata is a first-year high school student and former head of the Telepathy Club at Salt Middle School. Before becoming Spirits and Such Consultation Office secretary, her goal was to activate the powers of the human mind to communicate with aliens.


Tome seems to be a slacker, but she is passionate about the possibility of using telepathy contact extraterrestrials. However, when the Telepathy Club's research into the matter bears no results, she quickly gives up. When she learns that Mob is an Esper, her passion is revitalized. 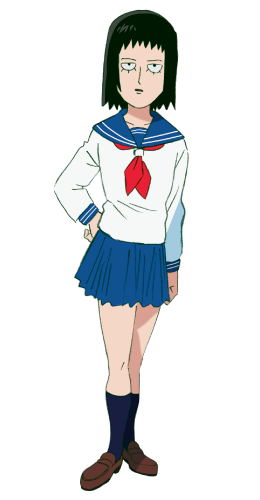 
Reigen Arataka is Mob's mentor and boss. He is the self-proclaimed "Greatest Psychic of the 21st Century" as well as owner and operator of the Spirits and Such Consultation Office.


Reigen has few to no qualms about manipulating clients, enemies, allies, and even spirits to his own advantage. Later in the series, he starts to feel guilty about manipulating Mob in particular. Conversation is his specialty. Throughout the series, he has been shown to remain composed in almost any situation, and he is extremely reluctant to admit to his own mistakes. He is very careful during his investigations, and he often confuses his adversaries by announcing his next action aloud and then doing something different.


Reigen seems to be a man guided by principles and is very socially and emotionally intelligent, as he believes that hurting other people is wrong and reminds Mob of that often, demonstrating his very honorable and noble side covered by his shady business. When he entered into the Claw headquarters, the subordinates found him to be a very kind and honorable man, and even after they realized he wasn't "The Boss", they still commented on his wise and caring nature. He is even willing to carry some of Mob's burden if it means the boy will suffer less, showing that he does care about those close to him, and even told Mob he didn't have to stoop to their level and fight because he knew Mob would be hurting, showing he doesn't want Mob to feel pain. He is clever and agile, often taking action at critical moments with his special techniques.